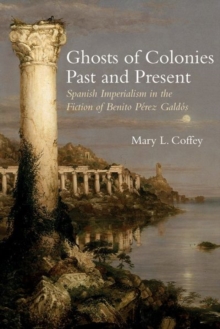 Ghosts of Colonies Past and Present : Spanish Imperialism in the Fiction of Benito Perez Galdos

Ghosts of Colonies Past and Present is the first comprehensive examination of how the literary production of Benito Perez Galdos, widely considered Spain's greatest nineteenth-century novelist, addresses the impact of imperial loss on the citizens of Spain.

Well before the events that would lead inexorably toward 1898, Galdos's texts question the nature of Spanish imperialism and the effect of colonial history on the lives of metropolitan citizens.

Methodologically framed by trauma studies, affect studies and the concept of the imperial turn, a close reading of the texts reveals Galdos's preoccupation with explaining not only how Spain lost its vast territories in the Americas in the early part of the century but also how Spanish citizens could manage the trauma of that loss through a reconfiguration of national identity.

His novels reveal the deeply entwined nature of colonial relations and life in the metropolis.

Moreover, byrecognizing that thenational response to the trauma of imperial loss extended across the nineteenth century, it becomes clear that Spain's engagement with European cultural and literary movements was, contrary to the assumptions of European imperialism, neither slow nor imitative but rather illustrative of the nation's unique position on the cusp of the historical shift to the postcolonial present.