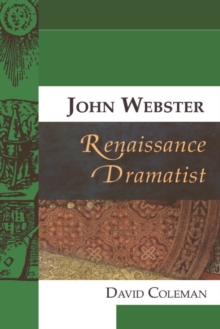 Part of the Renaissance dramatists series

Transgressive and darkly brilliant, the drama of John Webster has long been recognised as one of the crowning glories of the English Renaissance.

But this apparently idiosyncratic individual, fascinated by insanity, corruption, and the macabre, was also a successful businessman, involved in trade networks beyond the theatre, and writing most of his plays in apparently amicable collaboration with a host of other dramatists.

Such is the enigma of John Webster; caricatured as a pessimist obsessed with morbidity and death, Webster's true significance lies in his ability to perceive that the darkness at the heart of humanity must co-exist with the routine and the social interaction of everyday life.

John Webster, Renaissance Dramatist locates Webster's remarkable plays within the context of the culture from which they sprang.

Examining the uncertain political, religious, and economic climate of Jacobean London, this book offers a guide to one of the most distinctive, yet most elusive, voices of Renaissance England. Introducing readers to both the great tragedies, The Duchess of Malfi and The White Devil, and the lesser-known works, this book explains why Webster has fascinated and horrified generations of critics and theatregoers, and argues that the relevance and resonance of Webster's drama continues to grow.

Key Features * The most comprehensive and up-to-date introduction to Webster's dramatic oeuvre * Individual chapters on The White Devil, The Duchess of Malfi and The Devil's Law-Case place each major play in their historical, cultural and critical contexts * Examines the performance history of the plays, from the original stage performances to twenty-first century cinematic interpretations * The only introductory guide to Webster to take account of the most pioneering recent scholarship