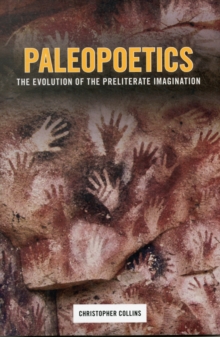 Paleopoetics : the evolution of the preliterate imagination

Paleopoetics maps the selective processes that originally shaped the human genus millions of years ago and prepared the human brain to play, imagine, empathize, and engage in fictive thought as mediated by language.

A manifestation of the "cognitive turn" in the humanities, Paleopoetics calls for a broader, more integrated interpretation of the reading experience, one that restores our connection to the ancient methods of thought production still resonating within us. Speaking with authority on the scientific aspects of cognitive poetics, Collins proposes reading literature using cognitive skills that predate language and writing.

These include the brain's capacity to perceive the visible world, store its images, and retrieve them later to form simulated mental events.

Long before humans could share stories through speech, they perceived, remembered, and imagined their own inner narratives. Drawing on a wide range of evidence, Collins builds an evolutionary bridge between humans' development of sensorimotor skills and their achievement of linguistic cognition, bringing current scientific perspective to such issues as the structure of narrative, the distinction between metaphor and metonymy, the relation of rhetoric to poetics, the relevance of performance theory to reading, the difference between orality and writing, and the nature of play and imagination.