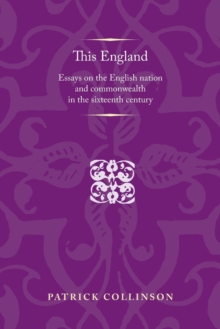 This England : essays on the English nation and commonwealth in the sixteenth century

Part of the Politics, culture and society in early modern Britain series

Patrick Collinson was one of Britain's foremost early modern historians.

This volume collects together a number of his most interesting and least easily accessible essays with a thoughtful introduction written specifically for this book. This England is a celebration of 'Englishness' in the sixteenth century.

It explores the growing conviction of 'Englishness' through the rapidly developing English language; the reinforcement of cultural nationalism as a result of the Protestant Reformation; the national and international situation of England at a time of acute national catastrophe; and of Queen Elizabeth I, the last of her line, remaining unmarried, refusing to even discuss the succession to her throne.

Introducing students of the period to an aspect of history largely neglected in the current vogue for histories of the Tudors, Collinson investigates the rising role of English, of England's God-centredness, before focusing on the role of Elizabethans as citizens rather than mere subjects.

It responds to a demand for a history which is no less social than political, and investigates what it meant to be a citizen of early modern England, living through the 1570s and 1580s. -- .