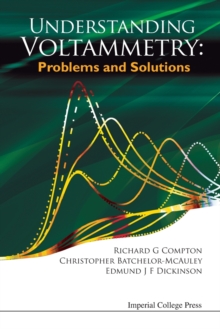 The field of electrochemical measurement, with respect to thermodynamics, kinetics and analysis, is widely recognised but the subject can be unpredictable to the novice, even if they have a strong physical and chemical background, especially if they wish to pursue quantitative measurements.

Accordingly, some significant experiments are, perhaps wisely, never attempted, while the literature is sadly replete with flawed attempts at rigorous voltammetry.This book presents problems and worked solutions for a wide range of theoretical and experimental subjects in the field of voltammetry.

The reader is assumed to have knowledge up to a Master's level of physical chemistry, but no exposure to electrochemistry in general, or voltammetry in particular, is required.

The problems included range in difficulty from senior undergraduate to research level, and develop important practical approaches in voltammetry.The problems presented in the earlier chapters focus on the fundamental theories of thermodynamics, electron transfer and diffusion.

Voltammetric experiments and their analysis are then considered, including extensive problems on both macroelectrode and microelectrode voltammetry.

Convection, hydrodynamic electrodes, homogeneous kinetics, adsorption and electroanalytical applications are discussed in the later chapters, as well as problems on two rapidly developing fields of voltammetry: weakly supported media and nanoscale electrodes.There is huge interest in the experimental procedure of voltammetry at present, and yet no dedicated question and answer book with exclusive voltammetric focus exists, in spite of the inherent challenges of the subject.

This book aims to fill that niche.