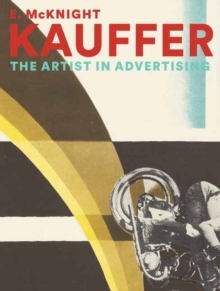 E. McKnight Kauffer (American, 1890-1954) was a pioneering figure who transformed the field of graphic design between the wars.

He drew upon the emerging visual languages of Cubism, Vorticism, and Surrealism to create a modern graphic style that shaped the development of commercial art.

Through collaborations with his avant-garde peers in art, literature, and design, including the Bloomsbury Group, Marion Dorn, T.S.

Eliot, Langston Hughes, Aldous Huxley, and Man Ray, Kauffer expanded the scope and impact of his field. This groundbreaking publication is the first to address the full range of Kauffer s career, from sophisticated designs for major clients including the London transport system, Random House, American Airlines, and Shell, as well as Allied propaganda posters during World War II to book covers, rugs, costumes, and stage sets.

An interdisciplinary group of authors offer critical perspectives on the cultural context of Kauffer s work, bringing new attention to the designer s depictions of race, gender, and global politics.