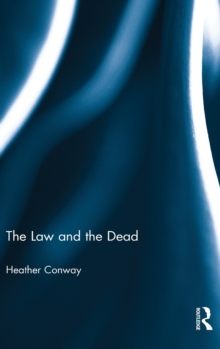 The law and the dead

The fate of the dead is a compelling and emotive subject, which also raises increasingly complex legal questions.

This book focuses on the substantive laws around disposal of the recently deceased and associated issues around their post-mortem fate.

It looks primarily at the laws in England and Wales but also offers a comparative approach, drawing heavily on material from other common law jurisdictions including Australia, New Zealand, Canada and the United States. The book provides an in-depth, contextual and comparative analysis of the substantive laws and policy issues around corpse disposal, exhumation and the posthumous treatment of the dead, including commemoration.

Topics covered include: the legal frameworks around burial, cremation and other disposal methods; the hierarchy of persons who have a legal duty to dispose of the dead and who are entitled to possession of the deceased's remains; offences against the dead; family burial disputes, and the legal status of burial instructions; the posthumous use of donated bodily material; and the rules around disinterment, and creating an appropriate memorial.

A key theme of the book will be to look at the manner in which conflicts involving the dead are becoming increasingly common in secular, multi-cultural societies where the traditional nuclear family model is no longer the norm, and how such legal contests are resolved by courts. As the first comprehensive survey of the laws in this area for decades, this book will be of use to academics, lawyers and judges adjudicating on issues around the fate of the dead, as well as the death industry and funeral service providers.