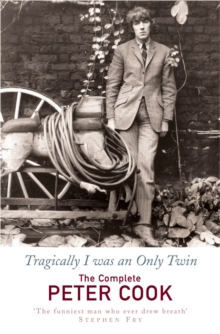 Tragically I was an only twin : the complete Peter Cook

For his many friends and fans, Peter Cook was quite simply the funniest man they'd ever encountered. And nearly eight years since his death, his status as one of Britain's greatest comedians shows no sign of shrinking.

Despite his reputation for idleness, Peter Cook was a prolific writer, who created countless outrageous sketches and articles, the very best, the most famous and some of the most unusual are collected here.

Some of these pieces have never been published before, others are out of print, a few only survive in print, and many have only ever been seen or heard - never read.

This collection ranges from Cook's first writing, at school and university, via "Beyond the Fringe", with Dudley Moore, Alan Bennett and Jonathan Miller, his dialogues with Moore as Pete and Dud, and Derek and Clive, and their brilliant TV series, "Not Only But Also", to transcripts of his late, great TV appearances, and a selection of his journalism for the "Daily Mail", the "Evening Standard" and "Private Eye".