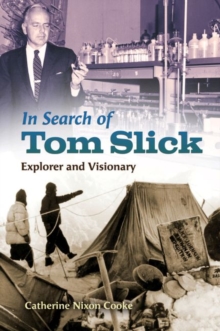 In Search of Tom Slick : Explorer and Visionary

The major guiding principle in the life of Tom Slick was a relentless search for adventure and exploration of the unknown, sparked by his immense curiosity about everything and his willingness to embrace and investigate new ideas.

He was a larger-than-life Texas oilman, entrepreneur, and explorer.

He climbed mountains in the Himalayas in search of the legendary Yeti.

He even wrote and published on the topic of world peace in the 1950s; the Tom Slick World Peace Lectures at the University of Texas' LBJ Library and the endowed Tom Slick Professorship of World Peace were established after his death in 1962.In this revised and expanded edition of her previously published biography, Catherine Nixon Cooke, niece of Tom Slick, has mined personal letters, family papers, archives of the institutes founded by her uncle, and other resources to expand what we know of this enigmatic, energetic adventurer.

In addition to relating his better-known exploits and pursuits, Cooke delves for the first time into Slick's shadowy connections with the world of international espionage, including clues that Slick may have been involved in certain operations and interests of the OSS and its successor organization, the CIA. Illustrated throughout with rare historic photographs, In Search of Tom Slick: Explorer and Visionary will introduce a new readership to this influential yet little known figure in modern history.