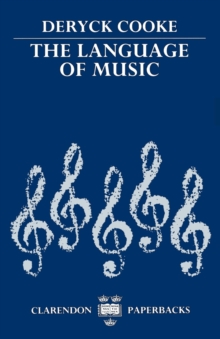 The Language of Music

This important and controversial book has come to be regarded as a modern classic. Originally published in 1959, it has exerted a profound influence on all subsequent discussion in the field of musical aesthetics.

He supports this view with numerous musical examples, varying from plainsong to Stravinsky.

Based on this evidence he argues that music is a language in the quite specific sense that idioms can be identified and a list of meanings compiled.

While acknowledging that a 'dictionary' of thelanguage of music cannot easily be provided, he attempts to supply what could at least be regarded as a 'phrase book'.

The enlightening analysis of two complete symphonies by Mozart and Vaughan Williams demonstrates the expressive function of musical form, the latter being an element which the author considers inseparable from musical content.