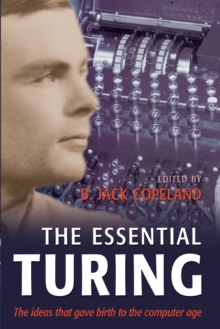 The essential Turing : seminal writings in computing, logic, philosophy, artificial intelligence, and artificial life plus the secrets of enigma

Alan Turing, pioneer of computing and WWII codebreaker, is one of the most important and influential thinkers of the twentieth century.

In this volume for the first time his key writings are made available to a broad, non-specialist readership.

They make fascinating reading both in their own right and for their historic significance: contemporary computational theory, cognitive science, artificial intelligence, and artificial life all spring from this ground-breaking work, which is also rich in philosophical and logical insight.

An introduction by leading Turing expert Jack Copeland provides the background and guides the reader through the selection.

In the same year he invented the abstract computing machines - now known simply as Turing machines - on which all subsequent stored-program digital computers are modeled.

During 1936-1938 Turing continued his studies, now at Princeton University.He completed a PhD in mathematical logic, analyzing the notion of 'intuition' in mathematics and introducing the idea of oracular computation, now fundamental in mathematical recursion theory.

An 'oracle' is an abstract device able to solve mathematical problems too difficult for the universal Turing machine.

In the summer of 1938 Turing returned to his Fellowship at King's.

When WWII started in 1939 he joined the wartime headquarters of the Government Code and Cypher School (GC&CS) at Bletchley Park, Buckinghamshire.

Building on earlier work by Polish cryptanalysts, Turing contributed crucially to the design of electro-mechanical machines ('bombes') used to decipher Enigma, the code by means of which the German armed forces sought to protect their radio communications.

Turing's work on the version of Enigma used by the German navy was vital to the battle for supremacy in the North Atlantic.

He also contributed to the attack on the cyphers known as 'Fish'.Based on binary teleprinter code, Fish was used during the latter part of the war in preference to morse-based Enigma for the encryption of high-level signals, for example messages from Hitler and other members of the German High Command.

It is estimated that the work of GC&CS shortened the war in Europe by at least two years.

Turing received the Order of the British Empire for the part he played.

In 1945, the war over, Turing was recruited to the National Physical Laboratory (NPL) in London, his brief to design and develop an electronic computer - a concrete form of the universal Turing machine.

Turing's report setting out his design for the Automatic Computing Engine (ACE) was the first relatively complete specification of an electronic stored-program general-purpose digital computer.

Delays beyond Turing's control resulted in NPL's losing the race to build the world's first working electronic stored-program digital computer - an honor that went to the Royal Society Computing Machine Laboratory at Manchester University, in June 1948.

Discouraged by the delays at NPL, Turing took up the Deputy Directorship of the Royal Society Computing Machine Laboratory in that year.Turing was a founding father of modern cognitive science and a leading early exponent of the hypothesis that the human brain is in large part a digital computing machine, theorizing that the cortex at birth is an 'unorganized machine' which through 'training' becomes organized 'into a universal machine or something like it'.

He also pioneered Artificial Intelligence. Turing spent the rest of his short career at Manchester University, being appointed to a specially created Readership in the Theory of Computing in May 1953.

He was elected a Fellow of the Royal Society of London in March 1951 (a high honor).

In March 1952, he was prosecuted for his homosexuality, then a crime in Britain, and sentenced to a period of twelve months hormone 'therapy'.

From 1951 Turing worked on what would now be called Artificial Life, using the Ferranti Mark I computer to model aspects of biological growth, in particular a chemical mechanism by which the genes of a zygote could determine the anatomical structure of the resulting animal or plant.

He died in the midst of this groundbreaking work.