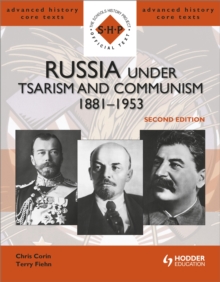 Depend on SHP's comprehensive and best-selling core texts to enrich your understanding of A Level History. SHP Advanced History Core Texts are the Schools History Project's acclaimed books for A level History.

They offer:- clear and penetrating narrative - comprehensively explaining the content required for examination success- thought provoking and relevant activities that explore the content and help students think analytically about the subject- thorough exam preparation through carefully designed tasks that address the distinctive requirements of A Level history including guidance in essay writing and source-based investigations. - a wide range of revision strategies including structured content summariesAdditional features include: - A focus route pathway for independent learners- Learning Trouble Spots - which address common misunderstandings- diagrammatic summaries of key areas of content and historical issues - accessible summaries of recent historical debates. - active learning approaches, including decision-making exercisesRussia under Tsarism and Communism 1881-1953 this title is a comprehensive core text on Russian history from 1881 to the death of Stalin.

It is a second edition of the bestselling Communist Russia under Lenin and Stalin.

This second edition is extended to cover the Tsarist pre-revolutionary period.

Other improvements for this second edition include more streamlined coverage of Stalin's foreign policy.