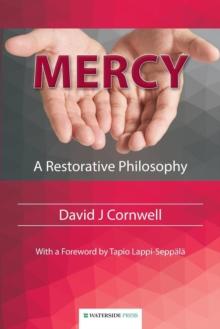 Restorative justice has attracted increasing support world-wide, but it sits uncomfortably alongside entrenched attitudes towards punishment and retribution. Because it does not involve 'locking-up people and throwing away the key' it is not favoured reading for risk-averse politicians or the media.

There are also vested interests at play which can be traced back to when the state first sought to enhance its coffers and cast victims to the side lines.

As a result, the concept of 'mercy' has become largely lost, distorting relationships between victims, offenders and communities. The author argues that rediscovering mercy would lead to a more humane and purposeful form of criminal justice.

His book looks at the characteristics of mercy and explains how it has become confused with mitigation and leniency.

He goes on to deconstruct and analyse current theoriesa and make proposals for reform. Long-overdue reform of contemporary criminal justice necessitates, as the author argues, a 'paradigm-shift' requiring inspired political leadership and a consensus to 'do justice better' between policy-makers, academics, jurists, criminal justice professionals and opinion-formers. The book examines the implications and challenges of such a journey and its purposes in a modern, progressive, enlightened and civilised society.