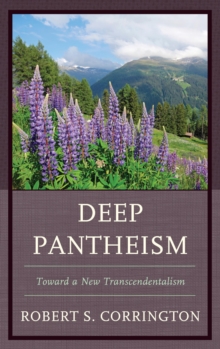 Deep pantheism: toward a new transcendentalism

Lexington Books
1498529704 / 9781498529709
eBook
141.3
09/12/2015
Available
137 pages
Description based on CIP data; item not viewed.
This book is a study in a new form of religious naturalism called “Deep Pantheism,” which has roots in American Transcendentalism, but also in phenomenology and Asian thought. It argues that the great divide within nature is that betweennature naturingandnature natured, the former term defined as “Nature creating itself out of itself alone,” while the latter term defined as “The innumerable orders of the World.” Explorations are made of the connections among the unconscious of nature, the archetypes, and the various layers of the human psyche. The Selving process is analyzed using the work of C.G.Jung and Otto Rank. Evolution and involution are compared as they relate to the Encompassing, and the priority of art over most forms of religion is argued for.