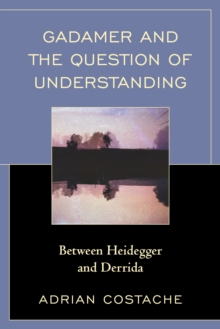 Gadamer and the Question of Understanding : Between Heidegger and Derrida

Hans-Georg Gadamer is depicted as a paradoxical figure in the literature.

When Gadamer's work is approached by itself, outside the history of hermeneutics, he is generally presented as the disciple of Martin Heidegger, whose main theoretical contribution lies in having transposed his ontological hermeneutics into the sphere of the human sciences.

Usually the master-student relation ends with a break between the two brought about by the student's desire to become herself a master.

In Gadamer and Heidegger's case, scholarship has always excluded the possibility of such a symbolic parricide.

However, when Gadamer's work is approached from the history of hermeneutics, he, not Heidegger, is revered as the central figure of hermeneutic theory in the twentieth century, and scholars perceive the works of the latter-together with those of his immediate forerunners Friedrich Schleiermacher and Wilhelm Dilthey-as mere preambles to the great hermeneutic theory proposed by Truth and Method, and the works of those following him as footnotes to it.

Gadamer and the Question of Understanding: Between Heidegger and Derrida dismantles this paradox by showing, on the one hand, that Gadamer's translation of Heidegger involved, as he himself says, a series of "essential alterations" to the original which make philosophical hermeneutics a more coherent and better articulated hermeneutic theory, one offering a more faithful description of the phenomenon of understanding than Heidegger's. And, on the other hand, by taking the dossier of the famous encounter between Gadamer and Derrida as its cue, Adrian Costache demonstrates that in light of Derrida's deconstruction, every step Gadamer takes forward from Heidegger as well as from Schleiermacher and Dilthey-however necessary--is problematic in itself. The insights in this book will be valuable to students and scholars interested in modern and contemporary European philosophy, especially those focusing on philosophical hermeneutics and deconstruction, as well as those working in social sciences that have incorporated a hermeneutic approach to their investigations, such as pedagogy, sociology, psychotherapy, law, and nursing.