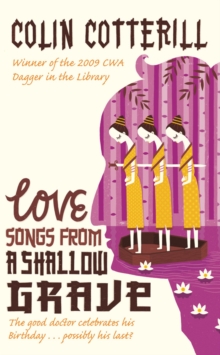 Love songs from a shallow grave

Part of the A Dr Siri mystery series

As usual, all is abnormal in Dr Siri Paiboun's morgue in downtown Vientiane.

Siri and his team are investigating the case of the Three Epees: three women skewered by a sword through their hearts.

A culprit has been apprehended, tried and sentenced to death in a week's time.

But Siri isn't sure they have the right man. Unfortunately, the number one, and only, coroner of Laos isn't in a position to help anyone - not even himself.

As his 74th birthday dawns, Siri finds himself incarcerated in prison by the Khymer Rouge, facing torture and starvation.

As usual, his curiosity is to blame for his predicament, but this time it looks as though his inquisitiveness could be the end of him.

Could Dr Siri's next outing be from beyond the grave?