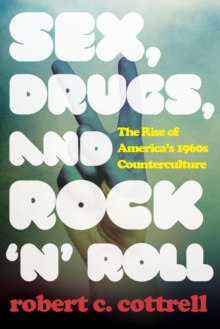 Sex, Drugs, and Rock 'n Roll: The American Counterculture of the 1960s offers a unique examination of the cultural flowering that enveloped the United States during that early postwar decade.

Robert C. Cottrell provides an enthralling view of the counterculture, beginning with an examination of American bohemia, the Lyrical Left of the pre-WWII era, and the hipsters.

He delves into the Beats, before analyzing the counterculture that emerged on both the East and West coasts, but soon cropped up in the American heartland as well.

Cottrell delivers something of a collective biography, through an exploration of the antics of seminal countercultural figures Allen Ginsberg, Jack Kerouac, Timothy Leary, and Ken Kesey.

Cottrell also presents fascinating chapters covering "the magic elixir of sex," rock 'n roll, the underground press, Haight-Ashbury, the literature that garnered the attention of many in the counterculture, Monterey Pop, the Summer of Love, the Death of Hippie, the March on the Pentagon, communes, Yippies, Weatherman, Woodstock, the Manson family, the women's movement, and the decade's legacies.