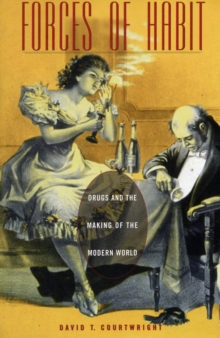 Forces of habit : drugs and the making of the modern world

Why are coffee, tobacco, and marijuana available the world over, but not peyote or qat?

Why are alcohol and tobacco legal, but not heroin or cocaine?

What drives the drug, and how has it come to be what it is today - a vast, chequered pattern of use and abuse, medicine and recreation, commerce and interdiction?

A global history of the acquisition of progressively more potent means of altering ordinary waking consciousness, this book provides the big picture of the discovery, interchange, and exploitation of the planet's psychoactive resources, from tea and kola to opiates and amphetamines.

Offering a social and biological account of why psychoactive goods proved so seductive, David Courtwright tracks the intersecting paths by which popular drugs entered the stream of global commerce.

He shows how the efforts of merchants and colonial planters expanded world supply, drove down prices, and drew millions of less affluent purchasers into the market, effectively democratizing drug consumption. He also shows how Europeans used alcohol as an inducement for native peoples to trade their furs, sell captives into slavery, and negotiate away their lands, and how monarchs taxed drugs to finance their wars and expanding empires.

This text explains why such profitable exploitation has increasingly given way, over the last hundred years, to policies of restriction and prohibition - and how economic and cultural considerations have shaped those policies to determine which drugs are readily accessible, which strictly medicinal, and which forbidden altogether.