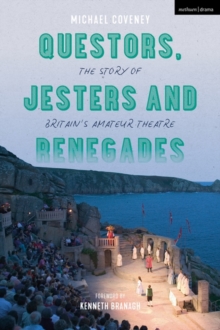 Questors, jesters and renegades : the story of Britain's amateur theatre

This is the vital story of the amateur theatre as it developed from the medieval guilds to the modern theatre of Ayckbourn and Pinter, with a few mishaps and missed cues along the way.

Michael Coveney - a former member of Ilford's Renegades - tells this tale with a charm and wit that will have you shouting out for an encore.

Between the two world wars, amateur theatre thrived across the UK, from Newcastle to Norwich, from Bolton to Birmingham and Bangor, championed by the likes of George Bernard Shaw, Sybil Thorndike, and J B Priestley.

Often born out of a particular political cause or predicament, many of these theatres and companies continue to evolve, survive and even prosper today.

This is the first account of its kind, packed with anecdote and previously unheard stories, and it shows how amateur theatre is more than a popular pastime: it has been endemic to the birth of the National Theatre, as well as a seedbed of talent and a fascinating barometer and product of the times in which we live. Some of the companies Coveney delves into - all taking centre stage in this entertaining and lively book - include the Questors and Tower Theatre in London; Birmingham's Crescent Theatre; The Little Theatre in Bolton, where Ian McKellen was a schoolboy participant; the Halifax Thespians; Lincolnshire's Broadbent Theatre, co-founded by Jim Broadbent's father and other conscientious objectors at the end of World War II; Crayford's Geoffrey Whitworth Theatre, where the careers of Michael Gambon and Diana Quick were launched; Anglesey's Theatr Fach, a crucible of Welsh language theatre; and Cornwall's stunning cliff-top Minack.