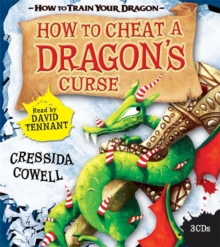 How to cheat a dragon's curse

By: Cowell, Cressida,  Tennant, David(Read by)

Part of the How to train your dragon series

Hiccup Horrendous Haddock III was an awesome sword-fighter, a dragon-whisperer and the greatest Viking Hero who ever lived.

But it wasn't always like that. Hiccup's memoirs look back to when Hiccup was just an ordinary boy, and finding it very hard to be a Hero.

Fishlegs has been struck with deadly Vorpentitis. The only cure is rare and almost impossible to find ... a potato. But where on Berk will Hiccup find such a thing? Hiccup will have to dodge Sharkworms, battle Doomfangs and outwit crazy Hooligans if he's going to be a Hero ... again. How to Train Your Dragon is now a major DreamWorks franchise starring Gerard Butler, Cate Blanchett and Jonah Hill and the TV series, Riders of Berk, can be seen on CBeebies and Cartoon Network.

Check out the brilliant website at www.howtotrainyourdragonbooks.com It's the place to go for games, downloads, activities and sneak peeks!(P) Hodder Children's Books 2007