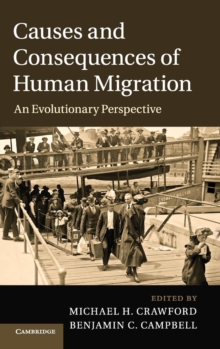 Causes and consequences of human migration : an evolutionary perspective

Migration is a widespread human activity dating back to the origin of our species.

Advances in genetic sequencing have greatly increased our ability to track prehistoric and historic population movements and allowed migration to be described both as a biological and socioeconomic process.

Presenting the latest research, Causes and Consequences of Human Migration provides an evolutionary perspective on human migration past and present.

Crawford and Campbell have brought together leading thinkers who provide examples from different world regions, using historical, demographic and genetic methodologies, and integrating archaeological, genetic and historical evidence to reconstruct large-scale population movements in each region.

Other chapters discuss established questions such as the Basque origins and the Caribbean slave trade.

Pitched at a graduate audience, this book will appeal to anyone with an interest in human population movements.