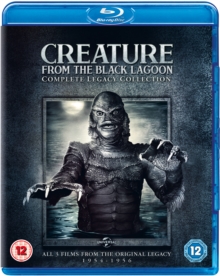 All three instalments of the classic sci-fi horror series.

In 'Creature from the Black Lagoon' (1954) an expedition exploring the Amazon River discovers a Gill Man - half man, half amphibian.

Thought by the team to be the missing link in human evolution, the creature is captured and kept under observation.

While in captivity it falls in love with the chief scientist (Richard Carlson)'s female assistant (Julie Adams) and kidnaps her before making its escape.

In 'Revenge of the Creature' (1955) a second expedition is sent up the Amazon to capture the mysterious Gill Man and bring him back to the Florida oceanarium.

While the creature is made a star exhibit, he falls in love with scientist Helen Dobson (Lori Nelson) and soon breaks out to capture her and terrorise the city.

Finally, in 'The Creature Walks Among Us' (1956), Dr William Barton (Jeff Morrow) and his team organise an expedition to the Everglades in order to catch the creature for good.

But as past outings have shown, the creature doesn't take well to being captured.