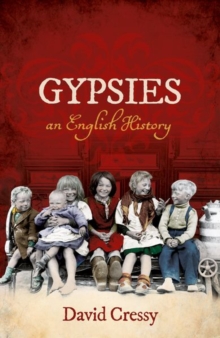 Who are this marginal and mysterious people who first arrived in England in early Tudor times?

Are tales of their distant origins on the Indian subcontinent true, or just another of the many myths and stories that have accreted around them over time? In fact, can they even be regarded as a single people or ethnicity at all, or are they little more than a useful concept?

Gypsies have frequently been vilified, and not much less frequently romanticized, by the settled population over the centuries, but social historian David Cressy now attempts to disentangle the myth from the reality of Gypsy life over more than half a millennium of English history. In this, the first comprehensive historical study of the doings and dealings of Gypsies in England, from their first appearance in early Tudor times to the present, he draws on original archival research, and a widerange of reading, to trace the many moments when Gypsy lives became entangled with those of villagers and townsfolk, religious and secular authorities, and social and moral reformers.

Crucially, it is a story not just of the Gypsy community and its peculiarities, but also of England's treatment of that community, from draconian Elizabethan statutes, through various degrees of toleration and fascination, right up to the tabloid newspaper campaigns against Gypsy and Traveller encampments of more recent years.


The title has been replaced. To check if this specific edition is still available please contact Customer Care +44(0)1482 384660 or schools.services@brownsbfs.co.uk, otherwise please click 9780198768142 to take you to the new version.