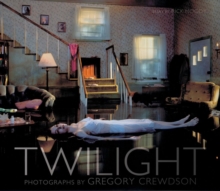 Crewdson's most recent series of photographs, Twilight, are created as elaborately constructed film stills, catching the mysterious moment of time between before and after, revealing unknowable or unimaginable aspects of domestic reality.

A cow lies on its back on the lawn between two houses while firemen secure the area and a man searches the sky.

Could the cow have rained down from above? In another image stacks and stacks of inedible slices of bread - bearing an odd resemblance to the mysterious monoliths at Stonehenge - are watched over by a gathering of birds.

Both entirely foreign and oddly familiar, these images are carefully orchestrated events that challenge our very notions of familiarity, undermining our sense of certainty.

These eerie and evocative photographs pair beauty with horror, obsession with disgust, and the real with the surreal, suggesting narratives open to endless interpretations.

The book includes an essay written by fiction writer Rick Moody. The book and exhibitions are comprised of the forty images from his Twilight series which was begun in 1998 - these exhibitions and this book chronicle the completion of the series and mark the first time it will be seen in its entirety.