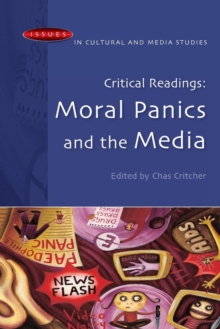 Moral panics and the media

Part of the Issues in cultural and media studies. Critical readings series

First coined by Stanley Cohen in 1972, 'moral panic' is a key term in media studies, used to refer to sudden eruptions of indignant concern about social issues.

An occurrence of moral panic is characterised by stylized and stereotypical representation by the mass media, and a tendency for those in power to claim the moral high ground and pronounce judgement.

In this important book, Chas Critcher brings together essential readings on moral panics, which he contextualises in the light of moral panic scholarship through an editor's introduction and concise section introductions.

The first section discusses moral panic models, and includes contributions on the history and intellectual background of the concept.

Differences in thinking between British and American moral panic scholarship are also examined.

This is followed by readings that look at themes such as the importance of language, rhetoric and discourse; the dynamics of media reporting and how it affects public opinion; and the idea of the 'risk society'. Finally, readings critique and debate the use and relevance of moral panic models. "Critical Readings: Moral Panics And The Media" is a valuable resource for students and researchers in media studies, criminology and sociology.