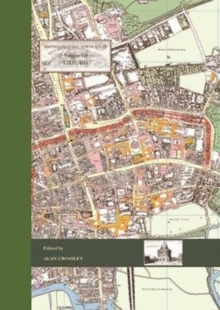 The latest volume of the British Historic Towns Atlas covers the internationally-renowned city of Oxford.

Famed for its university and its many outstanding historic buildings, the volume presents in mapped form the history of its topographical development.

From its prehistoric setting, through its contentious Anglo-Saxon foundation, the medieval establishment of its university, and its sporadic growth after that, the atlas charts how it became a nineteenth-century city dominated by colleges, churches, university buildings, and its associated publishing industry. The atlas is presented as a large-format portfolio containing a series of maps showing the city at key points in its history, many illustrations of its buildings and streets, maps to show its setting, and reproduction early maps of the city.

A readable text introduces and explains the maps, giving the reader a thorough grounding in how and why Oxford developed, and an explanation of its changing fortunes.

A supplementary chapter brings the situation up to date. Whilst there have been many histories of the university written, the atlas concentrates on the topographic development of Oxford as a settlement, and explains it in mapped form.

A comprehensive gazetteer lists every building and street shown on the maps, with a short history and references for further reading.