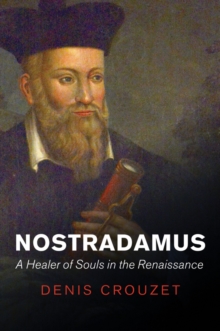 Nostradamus : a healer of souls in the Renaissance

By: Crouzet, Denis,  Greengrass, Mark(Translated by)

One of the most enigmatic figures in history, Nostradamus apothecary, astrologer and soothsayer is a continual source of fascination.

Indeed, his predictions are so much the stock-in-trade of the wildest merchants of imminent Doom that one could be forgiven for ignoring the fact that Michel de Nostredame, 1503-1566, was a figure firmly rooted in the society of the French Renaissance.

In this bold new account of the life and work of Nostradamus, Denis Crouzet shows that any attempt to interpret his Prophecies at face value is misguided.

Nostradamus was not trying to predict the future. He saw himself, rather, as 'prophesying', i.e. bringing the Word of God to humankind. In a century marked by the extreme violence of the Wars of Religion, Nostradamus' profound Christian faith placed him among the 'evangelicals' of his generation.

Rejecting the confessional tensions tearing Europe apart, he sought to coax his readers towards an interiorised piety, based on the essential presence of Christ.

Like Rabelais, for whom laughter was a therapy to help one cope with the misery of the times, Nostradamus saw himself as a physician of the soul as much as of the body. His unveiling of the menacing and horrendous events which await us in the future was a way of frightening his readers into the realisation that inner hatred was truly the greatest peril of all, to which the sole remedy was to live in the love and peace of Christ.

This inspired interpretation penetrates the imaginative world of Nostradamus, a man whose life is as mysterious as his writings.

It shows him in a completely new dimension, securing for him a significant place among the major thinkers of the Renaissance.