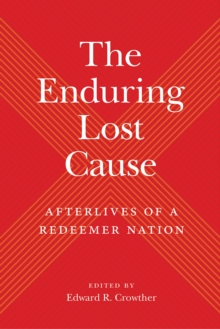 The Enduring Lost Cause : Afterlives of a Redeemer Nation

By: Crowther, Edward R.(Edited by)

Marking the fortieth anniversary of Charles Reagan Wilson's classic Baptized in Blood: The Religion of the Lost Cause, 1865-1920, this volume collects essays by such scholars as Carolyn ReneE Dupont, Sandy Dwayne Martin, Keith Harper, and Wilson himself to show how various aspects of the Lost Cause ideology persist into the present.

The Enduring Lost Cause examines the lasting legacy of a belief system that sought to vindicate the antebellum South and the Confederate fight to preserve it.

Contributors treat such topics as symbolism, the perpetuation of the Lost Cause in education, and the effects of the Lost Cause on gender and religion, as well as examining ways the ideology has changed over time.The twelve essays gathered here help the reader understand the development of a cultural phenomenon that affected generations of southerners and northerners alike, arising out of the efforts of former Confederates to make sense of their defeat, even at the expense of often mythologizing it.

From fresh looks at towering figures of the Lost Cause (to reexamining the role of African Americans in disseminating the ideology (in the form of a religious explanation for suffering), the essayists carefully analyze the tensions between the past and the present, true belief and commercialization, continuity and change.

Ultimately the narrative of the Lost Cause persists worldwide, merging with American exceptionalism to become a pillar of the conservative wing of US politics, as well as a lasting cultural legacy.

The Enduring Lost Cause provides a window into this world, helping us to understand the present in the context of the past.