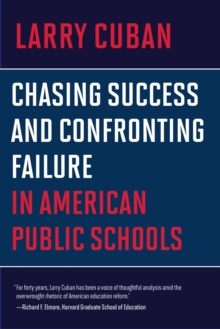 Eminent historian and educator Larry Cuban provides a thorough examination of, and challenge to, past and present definitions of what constitutes educational success in the US.

Cuban argues that in the history of American education, standards of achievement and inadequacy - as well as the reform efforts issuing from them - have been neither stable nor consistent.

Nor are these standards untainted by political considerations.

Rather, schools thrive or decline based on a variety of factors, including social and political dynamics, leadership in school districts and communities, and policy improvisations. Chasing Success and Confronting Failure in American Public Schools features profiles of two California high schools, Social Justice Humanitas Academy and MetWest, that are grappling with what it means to be successful (or failing) in the current moment.

Each school is expanding conventional views of achievement beyond standard measures, such as test scores, graduation rates, and college admissions.

But even as these schools' missions, sense of community, and curricula create an innovative form of success, both remain bound by traditional criteria set forth by district policymakers, practitioners, and parents. Through his exemplary research, Cuban illustrates how school reform is propelled by, and subject to, changing social and political fortunes.

He maintains that this understanding offers educators an opportunity to re-envision school performance against an American value system that too often rewards individual merit and competitive capitalism.