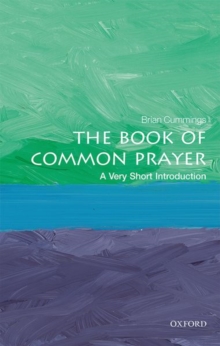 The book of common prayer : a very short introduction

By: Cummings, Brian (Anniversary Professor at the University of York)

The Book of Common Prayer is one of the most influential books in history.

First published in the reign of Edward VI, in 1549, it was a product of the English Reformation following the break with Rome.

For nearly five centuries, it has formed the order of worship for established Christianity in England.

More listeners have heard these prayers, it is said, than the soliloquies of Shakespeare.

As British imperial ambitions spread, the Book of CommonPrayer became the primary instrument (at least as much as the King James Bible) of English culture, firstly in Ireland in 1551.

When the Puritans fled to America in 1620 it was to escape the discipline imposed by of the Book of Common Prayer, yet the book came to embody official religion in America before and afterIndependence, and is still in use.

Today it is a global book: it was the first book printed in many languages, from north America to southern Africa, to the Indian sub-continent.

In this Very Short Introduction Brian Cummings tells the fascinating history of the Book of Common Prayer, and explains why it is easily misunderstood.

Designed in the 1540s as a radical Protestant answer to Catholic "superstition", within a century (during the English Civil Wars) radical Christians regarded the Book of Common Prayer as itself "superstitious" and even (paradoxically) "Papist".

Changing in meaning and context over time, the Book of Common Prayer hasacted as a cultural symbol, affecting the everyday conduct of life as much as the spiritual, and dividing conformity from non-conformity, in social terms as well as religious, from birth to marriage to death.