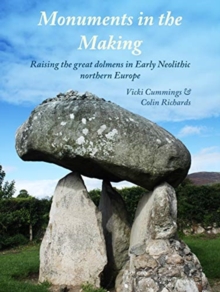 Monuments in the making : raising the great dolmens in early neolithic Northern Europe

In this book we offer an exciting new perspective on a distinctive form of megalithic monument that is found across most areas of northern Europe.

In order to achieve this we have abandoned outmoded typological classifications and re-introduced the term 'dolmen' to embrace a range of sites that share a common form of megalithic architecture: the elevation and display of a substantial stone.

By critically assessing the traditionally assigned role of these monuments and their architecture as megalithic tombs, the presence of the dead is reassessed and argued to form part of a process generating vibrancy to the materiality of the dolmen.

As such this book argues that the megalithic architecture identified as a dolmen is not a chambered tomb at all but instead is a qualitatively different form of monument.

We also provide an entirely different conception of the utility of this extraordinary megalithic architecture - one that seeks to emphasise its building as articulating discourses of wonder as a broad social strategy.

In this respect it is important to remember that many of these monuments were erected very early in the Neolithic and as a consequence of new people entering new lands, or social transformation.

In short, dolmens are monumental constructions employing experimental and emergent technologies to raise huge stones, which, once built, enchant those who come within their spaces.

Our claim is that dolmens were megalithic installations of affect, magical and extraordinary in construction and strategically positioned to induce both drama and awe in their encounter.