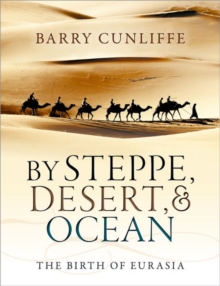 By steppe, desert, and ocean : the birth of Eurasia

By Steppe, Desert, and Ocean is nothing less than the story of how humans first started building the globalized world we know today.

Set on a huge continental stage, from Europe to China, it is a tale covering over 10,000 years, from the origins of farming around 9000 BC to the expansion of the Mongols in the thirteenth century AD.

An unashamedly 'big history', it charts the development of European, Near Eastern, and Chinese civilizations and the growing links between them by way of the Indian Ocean, the silk Roads, and the great steppe corridor (which crucially allowed horse riders to travel from Mongolia to the Great Hungarian Plain within a year).

Along the way, it is also the story of the rise and fall of empires, the development of maritime trade, and the shattering impact of predatory nomads on their urbanneighbours.

Above all, as this immense historical panorama unfolds, we begin to see in clearer focus those basic underlying factors - the acquisitive nature of humanity, the differing environments in which people live, and the dislocating effect of even slight climatic variation - which have driven change throughout the ages, and which help us better understand our world today.