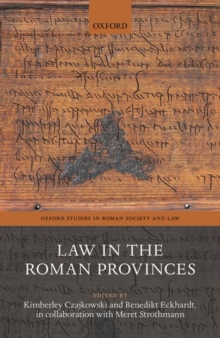 Law in the Roman Provinces

Part of the Oxford Studies in Roman Society & Law series

The study of the Roman Empire has changed dramatically in the last century, with significant emphasis now placed on understanding the experiences of subject populations, rather than a sole focus on the Roman imperial elites.

Local experiences, and interactions between periphery and centre, are an intrinsic component in our understanding of the empire's function over and against the earlier, top-down model.

But where does law fit into this new, decentralized pictureof empire?

This volume brings together internationally renowned scholars from both legal and historical backgrounds to study the operation of law in each region of the Roman Empire, from Britain to Egypt, from the first century BCE to the end of the third century CE.

Regional specificities are explored in detail alongside the emergence of common themes and activities in a series of case studies that together reveal a new and wide-ranging picture of law in the Roman Empire, balancing the practicalities ofregional variation with the ideological constructs of law and empire.