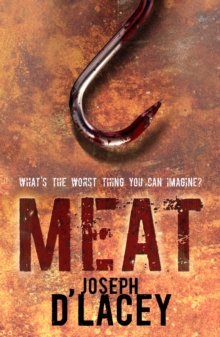 "Meat" - a dystopian horror fable about the evils of factory farming and slaughter.

Richard Shanti, a guilt-ridden slaughterhouse worker, has serious misgivings about his job.

He's known as the Ice Pick - the calmest, most efficient bolt-gunner in Abyrne's history.

Yet, in secret, he and his family are vegetarian. If the authorities find out, he'll be tried and slaughtered for sacrilege along with the Chosen - Abyrne's livestock. "Meat" is a tale of human depravity set in a grim post-cataclysmic England.

Abyrne's townsfolk need meat to survive. Their religion promotes flesh-eating, their economy depends on it.

Abyrne's ruling powers are the atheist Meat Baron, Rory Magnus, and the hyper-religious Parsons of the Welfare, headed by the Grand Bishop.

The two factions despise each but cannot maintain control without cooperating.In the derelict quarter the heretical messiah, John Collins, is preaching a blasphemous new doctrine: Meat isn't necessary for survival.

The townsfolk are listening. The tale begins as Abyrne faces its greatest conflict - war between the Meat Baron and the Welfare.