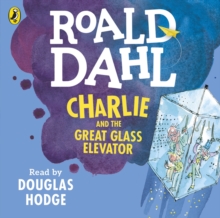 Charlie and the great glass elevator

This audiobook features original music. Charlie Bucket and his family are rushing around the Earth at seventeen-thousand miles an hour in a great glass elevator. It belongs to the fantastic Mr Willy Wonka, and the adventure becomes even greater upon discovering they're not the only ones orbiting the Earth at that particular time . . . Douglas Hodge is a multi-award-winning English actor, with Olivier and Tony awards for his performance in La Cage aux Folles, and nominations for his leading roles in Cyrano de Bergerac, Guys and Dolls and Inadmissible Evidence.

In 2013 he is playing the role of Willy Wonka in Sam Mendes' musical of Charlie and the Chocolate Factory. Listen to other Roald Dahl audiobooks read by some very famous voices, including Kate Winslet, David Walliams and Steven Fry - plus there are added squelchy soundeffects from Pinewood Studios!

Look out for new Roald Dahl apps in the App store and Google Play- including the disgusting TWIT OR MISS! inspired by the revolting Twits.