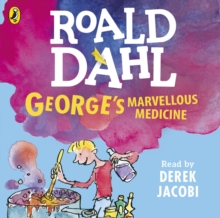 The audiobook features original music and 3D sound design by Pinewood film studios. George Kranky is eight-years-old and wondering what sort of mischief he might get into.

George's Grandma is a grizzly old grouch and George wants to teach her a lesson . . . And when Grandma's finished drinking George's marvellous medicine, she'll really have something to grumble about. Listen to GEORGE'S MARVELLOUS MEDICINE and other Roald Dahl audiobooks read by some very famous voices, including Kate Winslet, David Walliams and Steven Fry - plus there are added squelchy soundeffects from Pinewood Studios!

Look out for new Roald Dahl apps in the App store and Google Play- including the disgusting TWIT OR MISS! inspired by the revolting Twits.