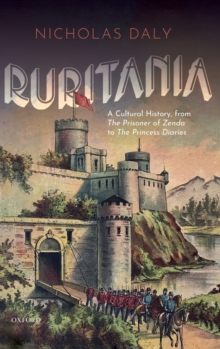 Ruritania : a cultural history, from The Prisoner of Zenda to The Princess Diaries

This is a book about the long cultural shadow cast by a single bestselling novel, Anthony Hope's The Prisoner of Zenda (1894), which introduced Ruritania, a colourful pocket kingdom. In this swashbuckling tale, Englishman Rudolf Rassendyll impersonates the king of Ruritania to foil a coup, but faces a dilemma when he falls for the lovely Princess Flavia.

Hope's novel inspired stage and screen adaptations, place names, and even a board game, but it alsolaunched a whole new subgenre, the "Ruritanian romance". The new form offered swordplay, royal romance, and splendid uniforms and gowns in such settings as Alasia, Balaria, and Cadonia. This study explores both the original appeal of The Prisoner of Zenda, and the extraordinary longevity and adaptability of the Ruritanian formula, which, it is argued, has been rooted in a lingering fascination with royalty, and the pocket kingdom's capacity to hold a looking glass up to Britain and later the United States.

Individual chapters look at Hope's novel and its stage and film adaptations; at the forgotten American versions of Ruritania; at the chocolate-box principalities ofthe musical stage; at Cold War reworkings of the formula; and at Ruritania's recent reappearance in young adult fiction and made-for-television Christmas movies.

The adventures of Ruritania have involved a diverse list of contributors, including John Buchan, P.G Wodehouse, Agatha Christie, Vladimir Nabokov,and Ian Fleming among the writers; Sigmund Romberg and Ivor Novello among the composers; Erich Von Stroheim and David O.

Selznick among the film-makers; and Robert Donat, Madeleine Carroll, Peter Ustinov, Peter Sellers, and Anne Hathaway among the performers.