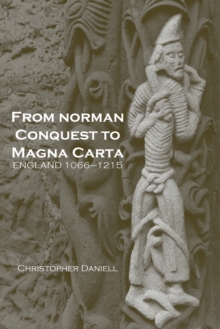 From Norman Conquest to Magna Carta is a wide-ranging history of England from 1066 to 1215.

Starting with the build-up to the Battle of Hastings and ending with the Magna Carta, Christopher Daniell traces the profound change England underwent over the period, from religion and the life of the court through to arts and architecture.

This survey uses a combination of original sources and sharp analysis to trace England's transformation after 1066.

The Papacy became powerful enough to proclaim Crusades and to challenge kings.

By 1215 the king's administration had become more sophisticated and centralised.

Between 1066 and 1215 Normandy was a major concern of the English kings, who either had to defend or conquer the Duchy.

The acceptance of the Magna Carta by King John in 1215 would revolutionise the world in centuries to come.

This volume will make essential reading for all students of medieval history, casting new light on a crucial period in England's