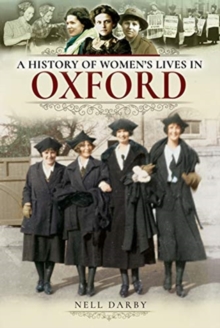 A history of women's lives in Oxford

Underneath the dreaming spires of Oxford's world-famous university, generations of women have lived their lives, fighting for the right to study there, and for a role within the city's educational, political and social spheres.

Although a few of these women's names have been recorded for posterity, they have been largely because of their association with worthy or famous men; in this book, though, their own lives are detailed, along with those who have been largely omitted from history. Women's lives have always been less recorded than those of men; where a woman helped her husband with his business, this help may not have been formally recorded in the census returns, and the details of jobs recorded there might not reflect the full scale of women's work and responsibilities.

So here, learn about the variety of work women undertook; their education, their social lives, and their attempts to carve out a valuable role for themselves.

Learn too of the problems they faced in living their lives: poverty, prison, suicide, or even murder.

This is no pretty picture of Oxford life designed for tourist brochures; instead, it aims to take a snapshot of the varied experiences of the city's female population over the course of a century.