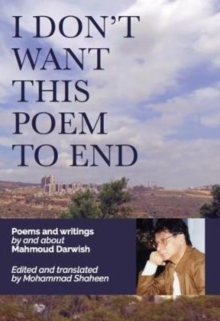 I Don't Want This Poem to End : Final Poems and Prose

When the Palestinian poet Mahmoud Darwish died in 2008, his friends visited his home and retrieved poems and writings some of which are gathered together in this book, translated into English for the first time.

They include three collections, from different phases in Darwish's writing career, as well as reminiscences by friends drawn from the poet's final years, and a moving account of the discovery of the new poems in the collection.

The contents include: My friend Mahmoud, a biographical memoir by Professor Mohammad Shaheen, a close friend and translator of the poems Finding the Poems, by Elias Khoury, another friend and a distinguished novelist The end of the night, It is a song, and I don't want this poem to end - three collections totalling about 80 poems, most translated for the first time into English On Exile, a prose essay by Mahmoud Darwish A letter from Mahmoud Darwish to his brother, written in 1965 from an Israeli prison.

Last meeting, by Faisal Darraj, a leading literary critic in the Arab world.