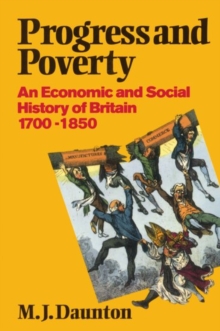 Progress and Poverty : An Economic and Social History of Britain 1700-1850

Part of the Economic & Social History of Britain series

This is a major college text. It will become prescribed reading for anyone studying British history in the 18th and 19th centuries.

The book examines the massive structural change, the creation of national markets, and the economic growth which characterized the movement from agriculture to industry.

In 1700 Britain was a rural country. By 1850, the year before the Great Exhibition, it was 'the workshop of the world'.

The debate on the relationship between povertyand progress is at the core of this clear and wide-ranging analysis of the world's first industrialized nation.