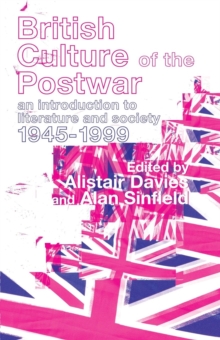 British culture of the postwar : an introduction to literature and society, 1945-1999

The second half of the twentieth century was a period which saw huge political, social, technological and economic changes.

These upheavals are mediated in often controversial innovations in literature, art and cinema.

From Angus Wilson to Pat Barker and Salman Rushdie, British Culture of the Post-War is an ideal starting point for those studying cultural developments in Britain of revent years.

Chapters on individual people and art forms give a clear and concise overview of the progression of different genres.

They also discuss the wider issues of Britain's relationships with America and Europe, and the idea of Britishness.

Each section is introduced with a short discussion of the major historical events of the period.

Read as a whole, British Culture of the Postwar will give students a comprehensive introduction to this turbulent and exciting period, and a greater understanding of the cultural production arising from it.