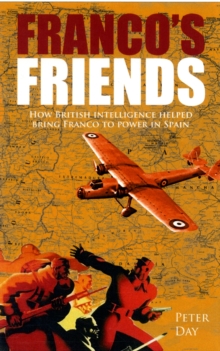 Published to coincide with the 75th anniversary of the Falangist uprising in July 2011, Franco's Friends tells the little-known true story of how MI6 orchestrated the coup that brought General Franco to power in Spain in 1936, leading to the Spanish civil war and 40 years of right-wing dictatorship.

It has long been known that a British plane took Franco from the Canaries to Morocco at the start of the coup and that Major Hugh Pollard travelled on the plane from London, masquerading as a tourist and accompanied by two attractive blondes to add to the deception that this was just a pleasure trip.

What is not known is the importance of his role and the extent of the involvement of the British intelligence services.

Franco's Friends shows that Pollard was a lifelong member of MI6 and discloses a list of Britons who helped engineer Franco's coup that reads like a who's who of British intelligence (including james Bond creator, Ian Fleming).

The book shows that MI6 continued working in Spain through to the Second World War, putting together behind-the-scenes deals and ensuring that the UK's interests were maintained. Crucially, MI6 even financed bribes paid to the Spanish generals by the British naval attache in Madrid to keep Spain neutral, thus reaping the benefits for Britain in 1939-45.

Franco's Friends , based on previously unknown material from the National Archives, Imperial War Museum, the British Library and private archives, is one of the great previously untold stories of the Second World War, revealing how Britain made a dubious but difficult moral choice that would have repercussions on the outcome of the Second World War.