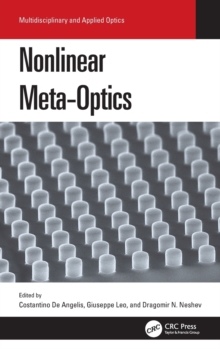 Part of the Multidisciplinary and Applied Optics series

This book addresses fabrication as well as characterization and modeling of semiconductor nanostructures in the optical regime, with a focus on nonlinear effects.

The visible range as well as near and far infrared spectral region will be considered with a view to different envisaged applications.

The book covers the current key challenges of the research in the area, including: exploiting new material platforms, fully extending the device operation into the nonlinear regime, adding re-configurability to the envisaged devices and proposing new modeling tools to help in conceiving new functionalities. * Explores several topics in the field of semiconductor nonlinear nanophotonics, including fabrication, characterization and modeling of semiconductor nanostructures in the optical regime, with a focus on nonlinear effects* Describes the research challenges in the field of optical metasurfaces in the nonlinear regime* Reviews the use and achievements of all-dielectric nanoantennas for strengthening the nonlinear optical response* Describes both theoretical and experimental aspects of photonic devices based on semiconductor optical nanoantennas and metasurfaces* Gathers contributions from several leading groups in this research field to provide a thorough and complete overview of the current state of the art in the field of semiconductor nonlinear nanophotonicsCostantino De Angelis has been full professor of electromagnetic fields at the University of Brescia since 1998.

He is an OSA Fellow and has been responsible for several university research contracts in the last 20 years within Europe, the United States, and Italy.

His technical interests are in optical antennas and nanophotonics.

He is the author of over 150 peer-reviewed scientific journal articles. Giuseppe Leo has been a full professor in physics at Paris Diderot University since 2004, and in charge of the nonlinear devices group of MPQ Laboratory since 2006.

His research areas include nonlinear optics, micro- and nano-photonics, and optoelectronics, with a focus on AlGaAs platform.

He has coordinated several research programs and coauthored 100 peer-reviewed journal articles, 200 conference papers, 10 book chapters and also has four patents. Dragomir Neshev is a professor in physics and the leader of the experimental photonics group in the Nonlinear Physics Centre at Australian National University (ANU).

He has coauthored 200 publications in international peer-reviewed scientific journals.