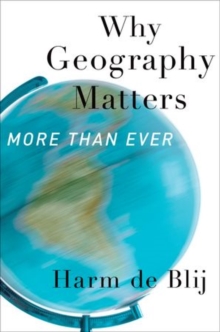 Why geography matters : more than ever

A decade into the 21st century, our world is more interconnected than ever before.

Yet even as the global community becomes increasingly more complex and competitive, the world is changing at a rapid pace.

Just consider some of the major events of the 21st century: intense climate change accompanied by significant weather extremes; deadly tsunamis caused by submarine earthquakes; unprecedented terrorist attacks in the U.S., Europe, and elsewhere; costly wars in Iraqand Afghanistan; a terrible and overlooked conflict in Equatorial Africa costing millions of lives; an economic crisis threatening the stability of the international system. And that's just the tip of the iceberg. With all this international upheaval, is there a conceptual framework that can accommodate these global changes, help us understand the transformations and interconnections, and inform our thoughts and decisions through a comprehensive perspective? In Why Geography Matters: More Than Ever, acclaimed author Harm de Blij answers this question with one resounding affirmation: geography. In this new and revised edition of the immensely popular Why Geography Matters, de Blij shows how and why the U.S. has become the world's most geographically illiterate society of consequence-and demonstrates that this geographic illiteracy is a direct risk to America's national security.

Despite the current state of global entwinement and rapid change, Americans seem to be less informed and less knowledgeable about the rest of the world than ever.

In 2011, the Nation's Report Card showed thatonly 20 percent of high school seniors were found to be proficient in geography.

De Blij shows why this dispiriting picture needs to change, and change now.

Insightful and thought-provoking, de Blij's book tackles topics from the burgeoning presence of China to the troubling disarray of the European Union, from the concerning nuclear ambitions of North Korea to the revolutionary Arab Spring.

By improving our understanding of the world's geography, de Blij shows, we can better respond to the events around us, and better prepare ourselves to face the global challenges ahead.

Peppering his writing with anecdotes from his own professional travels, deBlij expands upon his original argument in a new edition that is as engaging as it is eye opening.

Casual students of geography and professional policy makers alike will benefit from this stimulating and crucial perspective on geography and the way it informs our understanding of theworld.