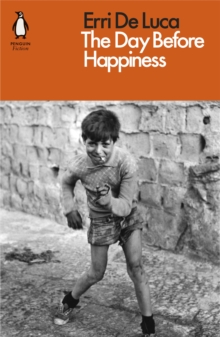 The day before happiness

'Happiness - was it right to name it without knowing it?

It sounded shameless in my mouth, like when someone shows off about knowing a celebrity and just uses their first name, saying Marcello when they really mean Mastroianni ...'A young orphan boy grows up in Naples, playing football, roaming the city's streets and hidden places.

The older boys call him 'monkey' because he can climb anywhere.

He is alone, apart from Don Gaetano, the apartment caretaker, who feeds him, teaches him to play scopa, and tells him stories about women, history and the dark secrets of Naples' past.

Then one day the boy sees a young girl standing at a window.

It is an encounter that will haunt his life for years and, eventually, shape his destiny.

Lyrical and exuberant, told with the simplicity of a fairy tale and the intensity of a memory, The Day Before Happiness is the story of friendship, a city and what makes us who we are.