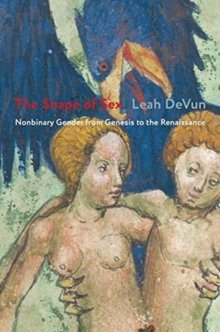 The Shape of Sex : Nonbinary Gender from Genesis to the Renaissance

The Shape of Sex is a pathbreaking history of "hermaphrodites"-as individuals who allegedly combined or crossed sex or gender binaries were called-from 200-1400 C.E.

Ranging widely across premodern European thought and culture, Leah DeVun reveals how and why efforts to define "the human" so often hinged on ideas about hermaphrodites. DeVun examines a host of thinkers-theologians, cartographers, natural philosophers, lawyers, poets, surgeons, and alchemists-who used ideas about hermaphrodites as conceptual tools to order their political, cultural, and natural worlds.

She reconstructs the cultural landscape navigated by individuals whose sex or gender did not fit the binary alongside debates about animality, sexuality, race, religion, and human nature.

The Shape of Sex charts an embrace of hermaphroditism in early Christianity, its brutal erasure at the turn of the thirteenth century, and a new enthusiasm for hermaphroditic transformations at the dawn of the Renaissance.

Along the way, DeVun explores beliefs that Adam and Jesus were hermaphrodites; images of "monstrous races" in encyclopedias, maps, and illuminated manuscripts; justifications for violence against purportedly hermaphroditic outsiders such as Jews and Muslims; and the surgical "correction" of bodies that seemed to flout binary divisions. In a moment when questions about sex, gender, and identity have become incredibly urgent, The Shape of Sex casts new light on a complex and often contradictory past.

It shows how premodern thinkers created a system of sex and embodiment that both anticipates and challenges modern beliefs about what it means to be male, female-and human.