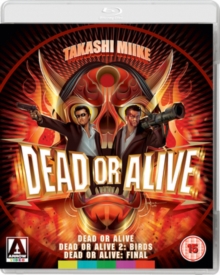 Collection of Japanese crime films directed by Takashi Miike. 'Dead Or Alive' (1999) follows brothers Ryuichi (Riki Takeuchi) and Toji (Michisuke Kashiwaya) as they look to make a name for themselves in the Tokyo criminal underworld.

Their nemesis is Detective Jojima (Shô Aikawa), a cop who has become involved in various crooked deals in order to pay for his ailing daughter's life-saving operation.

As Ryuichi tries to take a slice of a large Taiwanese drug haul, Jojima draws in closer, and the pair get set for a deadly confrontation.

In 'Dead Or Alive 2: Birds' (2000), hired killer Otamoko (Aikawa) accepts the contract to assassinate a vicious gangster, only to be beaten to it by another hitman.

Deciding to take the money anyway, Otamoko finds himself on the run with members of both the Triads and Yakuza in hot pursuit.

After eventually reaching the island of his birth, he teams up with an old friend in an attempt to fight back against the powerful crime syndicates which are looking for him.

Finally, in 'Dead Or Alive: Final' (2002), rugged cop Takeshi Honda (Takeuchi) and mellow drifter Ryô (Aikawa) join forces with a band of rebels to take on a deranged mayor in the post-apocalyptic city of Yokohama.