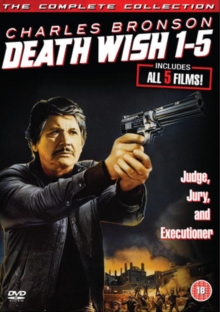 All five films in the series starring Charles Bronson as a vigilante out for revenge.

In 'Death Wish' (1974) mild-mannered New York architect Paul Kersey (Bronson) takes the law into his own hands after his wife is murdered and his daughter raped by a gang of thugs.

Jeff Goldblum makes his big-screen debut as one of the unfortunate muggers.

In 'Death Wish 2' (1981), after the suicide of his daughter in response to another violent attack, Kersey returns to the streets to deal out revenge to her assailants on a one by one basis. 'Death Wish 3' (1985) sees Kersey, still distraught at the loss of his family, take his rage out on street gangs with weapons including sub-machine guns and missile launchers.

In 'Death Wish 4 - The Crackdown' (1987) the death of his girlfriend's daughter from an overdose compels Kersey to declare war on L.A.'s drug dealers.

Finally, in 'Death Wish 5 - The Face of Death' (1993) the harassment of Kersey's girlfriend Livia (Lesley-Anne Down) by her ex-husband, O'Shea (Michael Parks), a Mafia boss using her business to launder money, forces Kersey back towards the gun cupboard one final time.