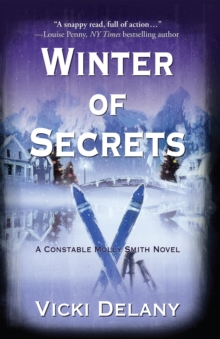 Siblings Wendy and Jason Wyatt-Yarmouth and their friends have come to the peaceful mountain town of Trafalgar, B.C. to enjoy a two-week vacation of skiing, drinking, drugs, and sex.

But tragedy strikes when two of the group crash through the ice into the frozen river. It's Christmas Eve and the snowstorm of the decade has settled over the town.

Then, at the stroke of midnight, they are summoned to the scene of an accident: a car has gone off the snowy road into the river.

Police, coroner, and medics all agree it was an accident.

But when the autopsy reveals a shocking secret, Molly and Sergeant John Winters are plunged into a world of sexual predators, recreational drugs, privilege, and high-living. Meanwhile, stalker Charlie Bassing is out of jail and looking for revenge, a handsome Mountie is giving Molly the eye, and her mother, Lucky, is cheerfully interfering in the investigation. And all Molly wants to do is ski the powder.... Having taken early retirement from her job as a systems analyst in the high-pressure financial world, Vicki Delany has settled down in bucolic Prince Edward County, Ontario, working on the next Constable Molly Smith novel.